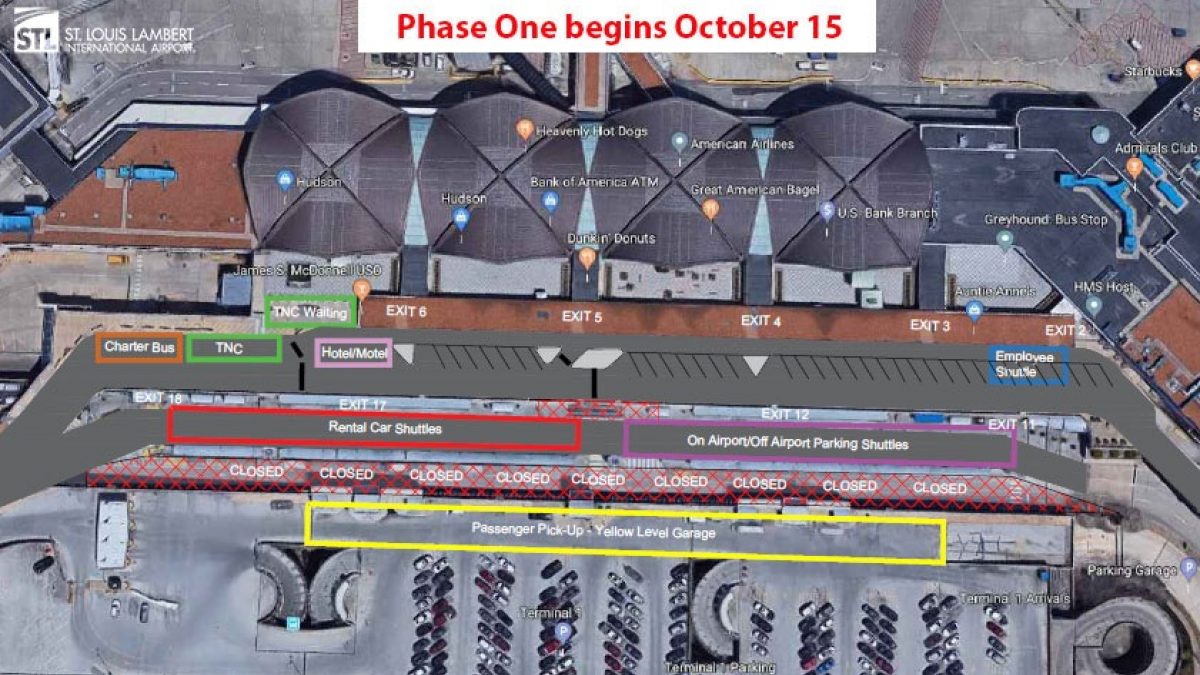 St. Louis Lambert International Airport (STL) will begin construction on the north and south arrival lanes of Terminal 1, requiring various lane closures and shifting many ground transportation pick-up zones to alternate locations. Construction begins October 15 and involves the resurfacing of the roadway, and reconstruction of the staircase between the Departures and Arrivals Drives. Construction will be conducted in two phases, to limit the impact to the normal flow of traffic.

During phase one, lanes south of the Arrivals Drive center island, where rental car and off airport parking shuttles currently operate, will be closed for approximately four weeks. Off-airport parking shuttles and rental car shuttles will move from South Arrivals Drive to the lanes north of the center island of Arrivals Drive. Passenger pickup for Terminal 1 will also be moved from North Arrivals Drive along the curb to the yellow level of the Terminal 1 parking garage. Pick-up zones for hotel and motel shuttles, charter buses, and ride share/TNC's (Uber and Lyft) will all be moved to Departures Drives (upper level), near exit 6.  The project will force the closure of most  crosswalks to and from the Terminal 1 Garage. Airport users are encouraged to access the Terminal 1 Garage from the bag claim level of Terminal 1 which connects under the roadways. Phase one is expected to last approximately four weeks, weather dependent.

During phase two, Terminal 1 North Arrivals Drive will be shut down. During this phase, passenger pickup will remain on the yellow level of the Terminal 1 parking garage, and hotel and motel shuttles, employee shuttles, ride share/TNC's and charter bus pickup locations will all remain the same as during phase one. Rental car shuttles and off-airport parking shuttles will return to their original locations on South Arrivals Drive. The staircase between Arrivals Drive and Departures Drive will be demolished during this phase, and will not reopen until spring 2019. Phase two is expected to last approximately four weeks, weather dependent.

During both phases while passenger pickup is on the yellow level of the Terminal 1 parking garage, drivers picking up arriving passengers will have a 15 minute grace period in the parking garage. STL strongly encourages drivers to use the Terminal 1 Cell Phone Lot while waiting for passengers to deplane before heading to the garage for pickup.

This work is being done as part of routine roadway rehabilitation to replace aging concrete. During both phases of construction, STL will have signage directing passengers in impacted areas to the new, temporary pickup locations. Terminal 2 and Lambert International Boulevard will not be impacted by these closures.